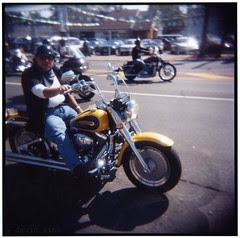 Every year, there's this big motorcycle ride that rumbles through Linden. I think it's a POW/MIA charity thing. It's a pretty amazing site to see all these motorcycles of all shapes and sizes ridden by people of all shapes and sizes. This past year as I was coming home from a bike ride (a non motored kind), I noticed that people were starting to line up on the sides of the street and cops and barriers were also showing up. So I grabbed some cameras and headed out to see the bikes. This is one of the shots I made that day. I like to think this guy is thinking "What are you lookin' at?"
Linden, NJ.
Summer 2008. 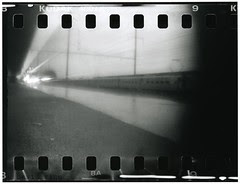 Homemade Pinhole.
Posted by D. Sine at 3:25 PM No comments: 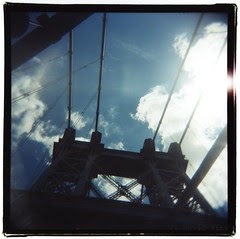 It's pretty easy for me to say that Joe Strummer was a hero of mine. I'm not alone in making such a statement. He and the music he created had a profound impact on a great many lives. Mine being one of them. Shorty after he passed, the owner of the Niagara Bar had a mural put on the side of the bar in tribute to Joe. I've made photos of this mural on more than one occasion. If I'm walking by and have a camera, there's a good chance I'll snap another shot of this fine tribute. 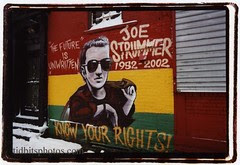 The first time I made a photo of the mural was not too soon after it went up. It was early one snowy morning, I was wandering around NYC after a night out, killing time until the first train back to New Jersey. I ended up in the area and made my way to 7th and A. The first light of day was trying to force it's way through the lingering clouds. I took out my trusty Canon AE-1 and made that shot. 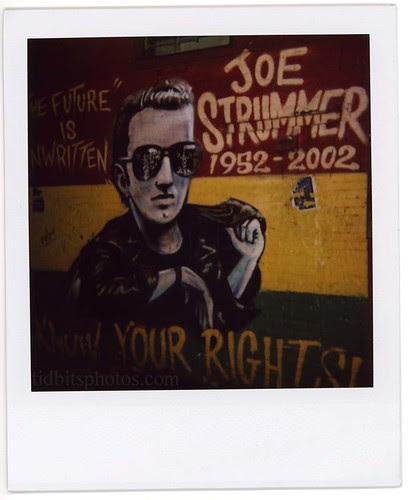 A few year later I was wandering by one night with a polaroid camera. 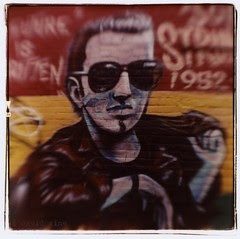 More recently, I was in the area shortly after flipping the lens in my Brownie Hawkeye Flash and made this shot.
The mural became a backdrop when Chris Salewicz dropped by the Niagara to do reading from his book "Redepmtion Song." 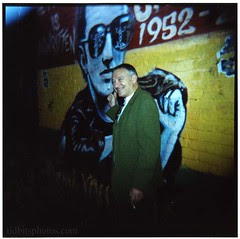 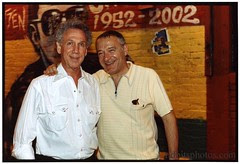 This last shot is of Chris with the great photographer Bob Gruen.
Here's the video of Joe's cover of the song "Redemption Song" which shows the painting of the mural.

A guy I worked with recently gave me a couple of cameras. One was an old Kodak Instamatic and the other was a newer Pentax. The Instamatic is beautiful and came with some flash bulbs and the box. Now I've just gotta search around for some film. As for the Pentax, it's one of those full auto everything with zoom options type of cameras. Nice for snap shots I guess. Not really anything that I would want to use on a regular basis. So I grabbed a screwdriver and started to dismantle the camera in order to turn it into a pinhole camera. It's been an amazing process. This camera had so much electric wiring and circuit boards stuffed into it. It's been really interesting seeing how the camera worked. 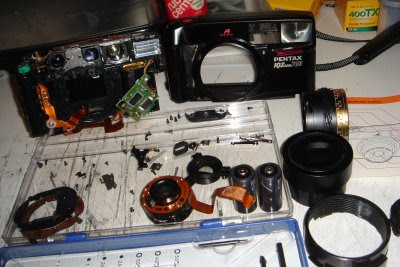 It's also interesting just how many tiny little screws were olding this thing together. 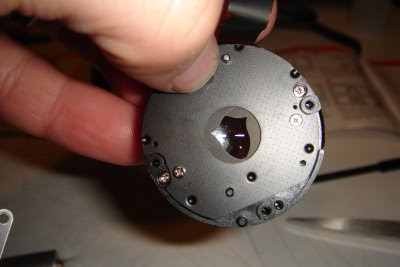 Check out that interesting shutter shape. 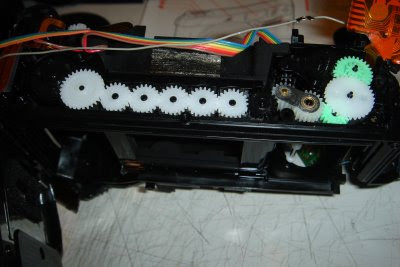 And look at all those little gears! It's all part of the film advance system. Which also proved to be the first big hurdle for me. Since this camera was auto everything, including the film advance, I had to figure out a way to manually advance the film once it's officially a pinhole. It took some drilling, cutting, and grinding but I think I came up with something that will work. I've got a lot of work to do on this project yet, but it's coming along nicely. And of course I'll post updates as they happen.
Posted by D. Sine at 11:35 AM No comments: 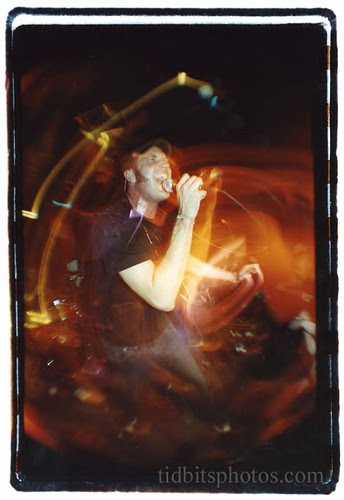 Sensefield at Maxwell's.
Hoboken, NJ.
I forget when exactly I made this shot.
Posted by D. Sine at 9:34 PM No comments: 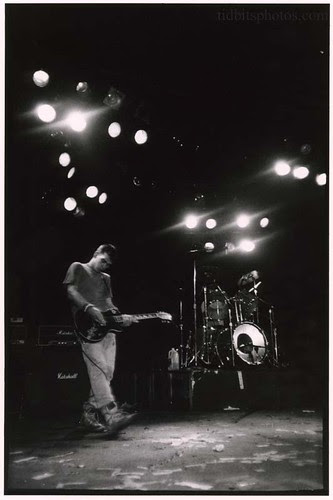 Swiz at the Country Club.
Summer of '89.

Do yourself a favor, listen to Swiz. Alot.
Posted by D. Sine at 3:58 PM No comments: 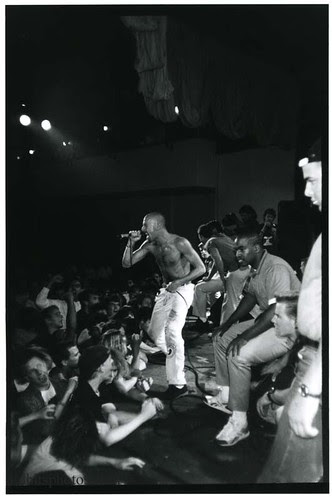 Aahhh, Blast! What a great band. One of my all time favorites who have provided me with years of great music from three great albums. They also provided me with one of my biggest show going disappointments. It was sometime in '86 or more likely in '87. Agent Orange, TSOL, DI, and Doggy Style at Fender's Ballroom in lovely Long Beach. Blast! were supposed to open the show and was a really big reason why I worked so hard at getting my dad to drive me to this show. "Power of Expression" very rarely left my turntable around this time and as good as Agent Orange is and the other bands playing the show, Blast! was the big draw for me. But, when the first band of the night came on, it wasn't Blast! What the fuck is this?!? Maybe Blast! will come on after this. At least that was my hope as I sat through the set of one of the worst bands I've ever seen. Their name? Easter. They were not Blast! and they were not good. It sucked. And Blast! didn't come on after them. They didn't play the show. I don't know why, but I was really bummed. Doggy Style were fun though. DI were very good. Always really liked them. Agent Orange were very good as well. TSOL were not. They had entered their metal phase and were just awful. I remember seeing a woman with a little girl on her shoulders and the little girl was crying. Yes, TSOL had gotten bad enough to make small children cry. So this show started with a great disappointment and ended a disappointment. At least there was some fun in the middle. I did get to see Blast! at the Country Club a few years later. They were still really heavy, and still great. And the bouncers had fun throwing scrawny punk kids off the stage. 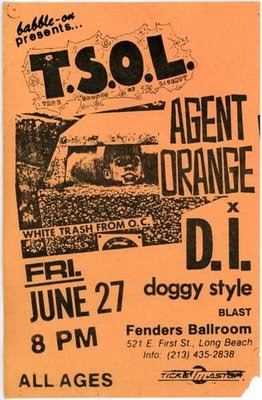 The Radio Silence Photo Show moves to Boston this weekend. Opening on Saturday Feb. 7, 2009. Should be a good time.
See ya there. 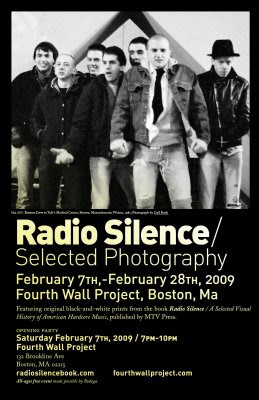 So yeah, I finally got around to scanning the prints from the first roll of film run through my homemade pinhole. I may have mentioned it in a previous post, but I'm pretty happy with the results. Nothing spectacular or jaw dropping, but pretty good for a first time try at a homemade camera. The issues that I see in these images is that they lack clarity and and the big vignetting on the the one side. The good thing is that I think I know why those issues came up. I made the pinhole through some gaffer tape and I believe that's the reason for the fuzziness. I also didn't get this pinhole centered in the bigger hole in the side of the camera, and I'm pretty sure that's the reason for the vignetting. 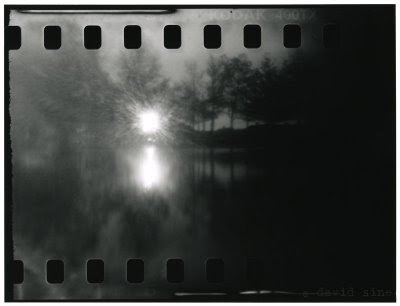 This is the very first image made with this camera. It's of the sun rising up through from trees and a pond in a park that I pass on my way to work. 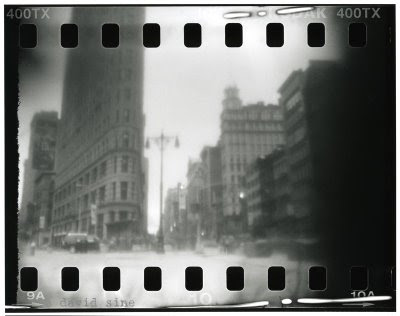 Flatiron Building, NYC. I love the old timey look of this. 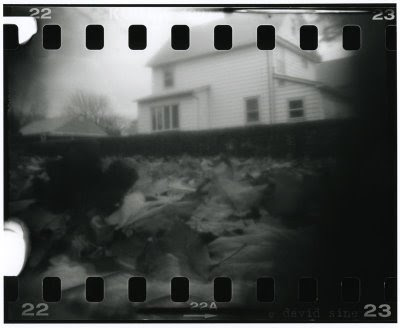 Fallen Leaves, Linden, NJ. Fall is the best season.
So these are just three of the five images I made prints of from this first roll. I've made a couple of changes to the camera before putting a new roll of film into it. First big change to make was with the pinhole itself. I made a pinhole though a bit of an old soda can and made sure it was centered this time. 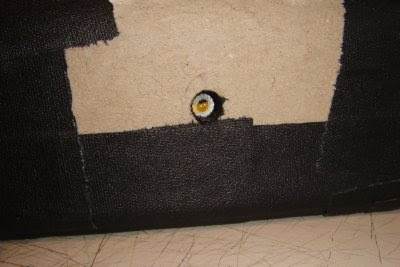 The other change is that this time, I've got color film in there. 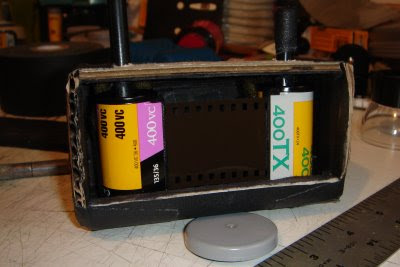 Watch my flickr site for more images from this little homemade jem and over course, all the other cameras in the growing collection.
Have fun.
Posted by D. Sine at 10:08 PM No comments: